Scary Monsters and Nice Sprites is a narrative RPG about spending your night in one of the only clubs in your city that’s safe for creatures of the night like yourself. All you want to do is have some fun just like the humans do. Play a supernatural creature of choice, put some sick EDM on the speakers and get your game on!

What you need in order to play:

No GM needed for this one! This game is designed to make all of you storytellers with an equal stake in how the story of your night(s) together go.

The basic premise of this game involves all of your characters hanging around at the same, supernaturals only place after dark – a night club, a concert, a bar, a coffeeshop, wherever you fancy as players. For one reason or another, you’re there to unwind, chill, and maybe – just maybe, find somebody to spend the night with. Each of you interact with each other by choosing the way you approach each other,  rolling to see how successful you were, then narrating how scenes go based on the results. You’ll show each other your character’s approval for how well the flirting is going by giving each other tokens. You’ll also be able to spend tokens to make sure conditions in the club are just right.

This game was submitted for the Hot Horror Game Jam in 2019!

In order to download this game you must purchase it at or above the minimum price of $5 USD. You will get access to the following files:

Each copy that you buy of Scary Monsters & Nice Sprites lets someone else grab a copy of this game for free. If your budget doesn't allow you to get this game for yourself, please claim one of these  free copies for the community.

I don't think I can give a review that expresses more about what's cool about this game than what kumada already wrote.

The one thing I will say to any person considering buying this game, is that although it's playable by two people, it really seems like that would be missing out compared to the fun of playing with 4 or 6, where the dating sim aspect really comes out and you might actually not be sure who goes home with whom! I think it's best played by a group of friends who all feel comfortable getting a little flirtatious (or like a lot flirtatious) with each other.

Omg, thank you so much for this! I am very proud of this game, and glad that other folks are enjoying it.

Scary Monsters is a game about supernatural beings hooking up in a club. It's GMless but does use dice, and most of the gameplay is approaching people and flirting, so be ready for that tone before playing.

That said, there *is* an option to only declare that you're interested in friendship, and also Scary Monsters is probably the most effective conversion I've seen of the dating sim genre into ttrpg format.

In Scary Monsters, you have a set of defenses against different kinds of flirting approaches (sexy, silly, smooth, spooky.) You rate those defenses in terms of strength, with the weakest defense the way you most want to be flirted with. When you flirt with someone, you pick an approach and roll a d12, and then they roll a die based on their corresponding defense. However, every time you use the same approach in a row, your flirt die gets smaller, encouraging you to vary your flirting.

I don't think I can overstate how cool and effortless this is mechanically and how good the game is at shaping its mechanics to incentivize people having the kind of experience they want. Scary Monsters also talks about consent explicitly, which is good and important too, but I think this is the first time I've seen a game ask players to lowkey declare what they're into and not have it feel weird in the slightest.

I think the only thing I can meaningfully critique here is the way the game uses tokens. Basically, you have a currency that you can use to buff your rolls (flirts or defenses), and the feeling I got while reading it was that it might be even more interesting to have your tokens only be able to buff or reduce someone else's flirt, or buff or reduce your own defend. That way the 'attacker' s approach depends largely on a) whether your friends want it to fail or succeed, and b) whether you want it to fail or succeed.

Overall, this game is really cool, and if you like dating sims, flirting, or clubbing and you have friends who share those interests and might want to date/flirt/club with you, you should check this out.

Thank you for reviewing this game! I'm really glad that you think it's worth a read/worth playing. Also: great point on the tokens. If I'm going to iterate this game in the future, will definitely keep this in mind.

Is the name of this game inspired by YMCK perhaps?

I was thinking Skrillex, since he has a song by the same name. 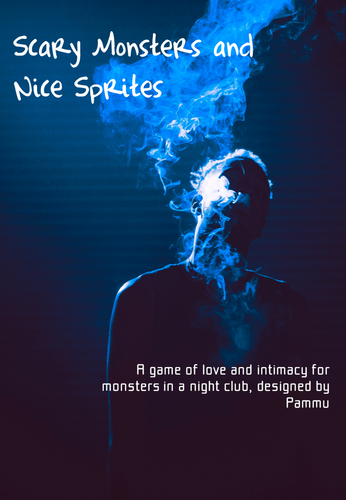 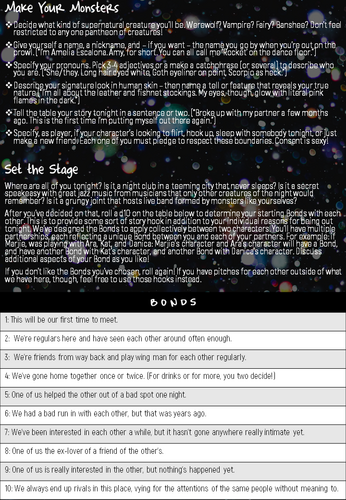